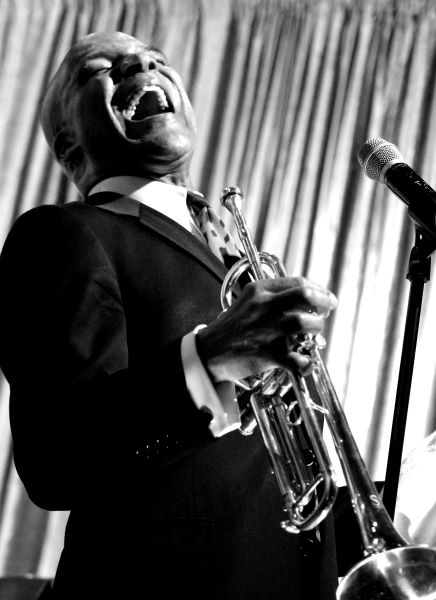 Which instrument do you play or which venue do you manage?

Tell us about your career in jazz.

Lonnie has toured extensive across the US, Europe, Japan and a USO tour in 2004 with Wayne Newton. McFadden resides in Kansas City now performing at local night clubs and upscale restaurants. The Producer and featured artist for the 2018 (10 day citywide) Charlie Parker Festival. For over 15 years Lonnie was known in Kansas City for tap dancing on the bar at The Phoenix, and his 19-month residency at Black Dolphin. McFadden has also performed at The Kauffman Center, Kauffman Stadium, Starlight Theater, The Blue-Room, and The Sprint Center. McFadden has shared the stage with, Wayne Newton, Sammy Davis Jr. Tony Orlando, Herb Alpert and many others. Lonnie has received numerous awards as an entertainer including Life Time Achievement Awards from the Jazz Museum in May 2016, and Living Legends Awards from Tapology October 2017. McFadden was recognized by the readers of Kansas City Magazine, The Pitch Magazine, & Ingram’s Magazine as The Best Entertainer in Kansas City. In 2020 Paul Coury and Lonnie McFadden partnered to create “Lonnie’s Reno Club”. Lonnie’s Reno Club is an upscale supper club that pays homage to the famous Reno Club of the 1930’s. Presently Lonnie McFadden performs every Friday and Saturday night at Lonnie’s Reno Club in Kansas City.

Where can KC Jazz fans watch you perform?